I would say that with most shows that I go to that I have an encyclopedic knowledge (or something approximating that standard) of the band I’m about to see.  I expect to know the title of each song that I hear instantaneously, and probably a few facts about it as well.  However, that is not always the case.

I’ve been listening to Mastodon ever since I heard that they were releasing a concept album about Moby Dick.  I decided that right then and there, that I needed to purchase this record because 1). The band’s name was Mastodon; 2). They wrote an album called Leviathan; and 3). It was a concept album about Moby Dick.  It really does not get more metal than that.  And to think,  ten years later, it’s probably only the third-most ridiculous thing they’ve done.

I’ve enjoyed listening to Leviathan over the years, and have dutifully bought each subsequent release, but I can’t say that I truly understand their music.  In many ways, listening to Mastodon has mirrored my attempts to read Gravity’s Rainbow–the individual sentences make sense (the riffs), and I get the idea of the general story (the album as a whole), but fuck me if I know what’s happening from paragraph-to-paragraph (the songs).  So, generally my impressions of Mastodon go from “that’s a sick riff/drumfill” to “that was a really intense experience”.  It would be pure luck if I could identify a song as it were playing, for the most part. 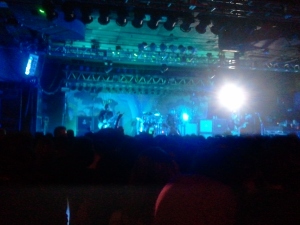 Therefore, I’m not the best source for Mastodon fans who want to hear about the band as they kicked off their most recent tour in Portland, in anticipation of the release of their upcoming album Once More ‘Round the Sun.  I can tell you these things for certain: the band was incredibly tight, with Brent Hinds’s solos and Brann Dailor’s drumming being specific standouts, and it was incredibly loud.  The vocals were buried deep in the mix for each vocalist, but I’d argue they were probably not the most important part of each song.  The set was a pretty even mix of material from each album, and featured a couple of new tracks as well: “High Road”, which I immediately recognized (especially with Brann’s Ozzy-ish vocals in the chorus), and “Chimes at Midnight”, which I did not.

The main takeaway I’d say is that Mastodon fans should be excited to once again see them on tour, and novices shouldn’t be afraid to witness a spectacle of amazing musicianship.  In other words, I was glad to get my metal on once again, even if it was on a Tuesday night.