In my review of Nothing’s debut album, I commented on the fact that metal was an often stagnant genre, a style that would find bands content to cover the same ground over and over again in hope that the law of diminishing returns somehow didn’t apply to them.  One band that resisted this trap for years was Tool.  Their albums for years showed a band willing to explore the outer edges of heavy music, with each album possessing distinct characteristics.  Tool would evolve with each release, from the dirty, sludgy darkness of Undertow to the more reflective and spiraling Lateralus, pushing themselves musically and incorporating more and more elements of progressive rock along the way.  It wasn’t until 10,000 Days that Tool sounded as if they were repeating themselves.

It was with that last release that that it seemed Tool had begun spinning its wheels, with the best moments sounding like variations of riffs we heard before from Lateralus and the worst parts simply failing to make an impact (the problem with most of the second half of the album in a nutshell).  The feeling that the band was treading water combined with the increasing time between new albums leads to a problem that befalls other similar bands–the danger of becoming a nostalgia act.  The audience is no longer looking forward to new, exciting (and especially in the case of metal, “dangerous”) ideas, but have come to the show to bask in the comfort of remembering their favorites from a previous era.  With their last release dating back all the way to 2006, when I was still working in radio and years before attending law school, and no new music having been announced, “nostalgia” was strictly my approach: it was time to revisit some of my high school metalhead(-ish) days.

Adding to the general air of nostalgia that I personally felt was the fact that I had not seen Tool live since their show in Eugene back in 2001–a time before I even had a drivers license, which means that yes my mom indeed made the trip down and then had to figure out something to do on a midweek evening in Eugene on the fly.  That show was a particularly mind-blowing experience, and not only because it was my first exposure to King Crimson (and that presented me with the opportunity to purchase this bad-ass t-shirt).  I had arrived at the show an intrigued skeptic and left a full-fledged fan–at least by the standards of normal fans (spend any time in certain areas of the internet, and you are bound to find a Tool SuperFan, the kind that spends hours constructing YouTube videos breaking down the supposed allusions in Maynard’s lyrics and the symbology present in album artwork (and those are the more pleasant examples)).

We arrived in between the opener and the main event, partly due to an epic Blazers comeback (that fell short), and partly due to the ridiculous parking setup at the arena.  After some shuffling around, we made our way down to the arena floor, where we found our seats–yes, this was a heavy metal show, but Tool was not going to allow us to get disorderly in any way.  There were several people in official blue polo shirts that would make sure that chaos would be restrained, at least on the audience’s side, and please no photos or videos thank you.  Having previously seen them at the Hult Center, which is home to the finer arts groups of Eugene, I remarked to my compatriots that it was not unexpected for us to have seats, and besides we were there to witness a full-fledged “experience”. 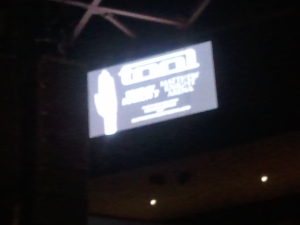 The one photograph I risked taking

Tool began the show in a fury, opening up with the rager “Hooker With A Penis” from Ænima, as the man in camo would have predicted if he was in attendance (I personally would not trust a person in a camo shirt in many situations, but the intricacies of the Tool setlist would mark one of the few exceptions).  The band was all business, with minimal stage banter with the audience beyond a few brief words of thanks and a mention of the city’s name (though Maynard’s quip this time lacked the touch of the last appearance, where he acted as the party responsible for introducing the band to the city and vice-versa: “Tool, Eugene.  Eugene, Tool.”).  There was no encore, but a brief intermission midway through the set that was partnered with a countdown clock, giving you the exact knowledge of the targeted time to return with an overpriced beer.  (Unfortunately, the intermission was not accompanied by their own song, “Intermission”.)

Each member was set in his traditional position: Adam and Justin up front and out to the sides, and Maynard and Danny in the back but centered.  The setup of the band and their respective demeanor exemplified the interesting dynamic within the band.  Maynard is a powerful frontman on record, with a charismatic and distinctive voice that stands out even in collaborations with other bands and lyrics that inspire careful study and feverish devotion in fans.  However, Maynard’s stage placement de-emphasizes the position of the singer within the band, and puts him on an equal footing with everyone else.  And Maynard’s performance and movements when singing also differ from the traditional frontman–he positions himself sideways to the audience, and always seems to act as if he is in combat with an unseen enemy, actions which often enhance his own lyrics.

Maynard is but one example of how Tool upends the traditional band structure within itself–the guitar generally does the work of keeping everyone grounded with the more basic rhythms, the bass provides a significant amount of the melody, and the drums are where most of the fireworks happen.  I pondered whether or not to do a Feats of Strength post highlighting how this dynamic works, using the breakdown/solo of 46 & 2 as the example.  If you listen closely, the guitar and bass go in and out of sync, alternating parts where they play in different time signatures.  In those parts, the bass gets the melody while the guitar palm mutes the accent hits.  And then Danny comes in with an amazing drum solo, syncopating his parts with amazing precision but also using his gigantic drum kit to actually create a melody that lines up with the guitar and bass perfectly.  There’s a good reason that this song is a fan favorite, and we of course went nuts when the band played it–and believe me, all eyes in the audience were on Danny as he nailed that solo.

It’s that precision coupled with the complexity of the music which draws a lot of people in, but the moment that I remember most from the previous concert was the time where the crack was most apparent.  It was one of the first performances of the Lateralus tour, and so the band was still getting a handle on how to play the songs live, including “Schism”.  For the bridge/solo, they had Maynard pick up a guitar to handle the melody, but his inexperience was clear and he flubbed a couple of the notes.  It was that little moment which made the band more human and less of a machine, and it actually made the rest of the set more impressive.  There was no such moment this time, as Maynard played his part on a keyboard this time and was much more comfortable.

With no new songs to play, the question then was how much of the experience felt like a nostalgia act.  The setlist hit some of the expected highlights, but the band also often did a great job in disguising a lot of what was coming up with interesting new intros and interstitial music.  And combined with an even more elaborate video setup, with huge television screens playing some of their trademark bizarre art (at one point during “Lateralus”, the image could only be describe as a view from the back of a spiraling train of guys providing manual pleasure to each other), it made for a pretty memorable experience.  At this point though, the time has passed for me to be a zealous follower, but I can still say that I’m intrigued by what is coming up next.