Recently, a piece by Ted Gioia in The Daily Best made the social media rounds where the critic lamented the depths to which music criticism as he perceives it has fallen.  Gioia made some good points, though a lot of it reads as a screed that those who fancy themselves as members of the intelligentsia could latch onto and feel superior to seemingly low culture.  I say this as someone who tweeted out the article with similar intentions.

Gioia’s thesis is that music criticism has devolved into emphasizing spectacle over substance–that publications are more concerned with fashion and controversy and less interested in substance and musicality.  This is certainly true to some extent.  Depending on the source, it could easily appear that the only thing that matters is what’s controversial or scandalous, and the fact that music is involved is only window dressing.  Of course, you may notice the caveat I included at the beginning of that concession–it depends where you look. 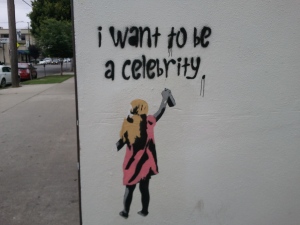 Fake Banksy probably has a point.

With that in mind, Gioia still managed to make a few good arguments.  One that I thought was particularly persuasive was the comparison to football announcing and their expectations of the audience’s knowledge (though I assume that Gioia was not thinking of Troy Aikman when he thought of the analogy).  Announcers drop technical terms all the time in their game commentary, and often take for granted that the audience knows the specific jargon concerning plays and formations.  Music writers, by contrast, often seem to bend over backwards to avoid mentioning specific musical vocabulary and concepts, and instead resort to broad language and vague analysis.

So it pained me when I read this quick jab in an unrelated Deadspin post on schlubby frontmen (for the record, the fact that James Murphy is not the inaugural nominee makes the Baseball Hall of Fame not making Greg Maddux a unanimous inductee look positively sane).  In referring to the Gioia piece, Rob Harvilla writes “[t]he hot new thing in rock criticism is to talk trash about people who don’t know what a pentatonic scale is[.]”  Presumably, Mr. Harvilla should know something about music considering his many jobs in the field, but he’s content to play the part of the semi-ignorant rube at least for these purposes.

The reason I found this quote more distressing than most was the fact that Deadspin takes the opposite approach when it comes to sports.  This is a site that has a whole section devoted to analytics and using proper statistics to cut through the bullshit.  The general ethos of the site has long been to mock the empty platitudes and generic analysis by the pundit class, and determine what really works in sports.  In other words, the same goals and ideals that Gioia was attempting to convey.  The attempted slam about the pentatonic scale is particularly noteworthy, because in the original piece Gioia cites an instance where Harry Connick, Jr. made a reference to it in an American Idol episode and was mocked for doing so.  It’s the celebration of ignorance and mocking of knowledge that Gioia lamented–the very same things that Deadspin has spent its years decrying.  It’s not as if a basic scale that is the foundation for most popular music should be worthy of knowledge, right?

That’s not to say Gioia is fully right.  As I mentioned above, part of the problem is that Gioia is probably not looking at the right sources.  There are numerous places where you will find that intellectualism and music criticism are not mutually exclusive (like, for instance, this site).  This was the great point that Jody Rosen made in his Vulture piece.  Why is Gioia looking to Billboard magazine for a discussion of music theory?  The magazine’s primary focus is the business itself, but I’ve linked to multiple Billboard articles that are pretty incisive critical explorations or great interviews with musicians.

You just have to know where to search.  And we’ll continue to do our part to help.