I remember a recent conversation where an acquaintance asked a question along the lines of “How did Neutral Milk Hotel become so popular?” For the vast majority of the American public, this would seem to be a preposterous question, especially for a group that has yet to sell even a gold record; furthermore, I’d imagine that most of these people would be clueless as to how those three words could possibly fit together.*  However, depending on the community, this bewilderment is understandable.  Within the right group of people, Neutral Milk Hotel, and especially their masterpiece In the Aeroplane Over the Sea, have taken on an almost hagiographic glow, and both now exist as shorthand for raw, cathartic genius and simple, pure brilliance.**  Not bad for a few guys from a small town in Louisiana.

One of the signs that you know you’re in my office.

I’m going to twist the original question a little bit, and rephrase it as “How did Neutral Milk Hotel reach this level of acclaim (with the corollary ‘Is it deserved?’ answered with a quick and resounding ‘Yes.’)?”  Looking back to their origins, there would be few clues as to how these guys would become the most influential voices in the independent music scene of the last two decades.  As the story has been recounted before, it dates back to the early days of childhood friendship in Ruston, Louisiana, the home of Louisiana Tech.  It began with the sons of a couple of professors bonding over their love of strange and exotic music, and together they navigated following their cultural ambitions with the realities of small town life.  Sharing records eventually led to experimentation and making recordings themselves, and it was from those humble beginnings that the Elephant 6 collective was born.

Those childhood friends were Robert Schneider, Bill Doss, William Cullen Hart, and Jeff Mangum, and their bands and their subsequent offshoots would create some of the greatest music of the 90’s.  The Apples in Stereo, The Olivia Tremor Control, and Neutral Milk Hotel all trace their origins to those days in Ruston, and they in turn would inspire and work with several other bands like Beulah, Elf Power, and of Montreal that would shape the sound of independent music from the mid-90’s to today.  But while I feel this history lesson is beginning to drag us away from the question at hand, it does provide the proper context to understand Neutral Milk Hotel.  It was within that setting that a culture of sharing and experimentation developed, where bands and genres blended as necessary, all in the name of making beautiful and heartfelt music.  It was from these humble beginnings where you can also hear the origins of the Elephant 6 aesthetic.  The sincere belief that merely lacking the trappings of an expensive studio is not a good enough excuse to prevent musicians from emulating the psychedelic sounds of the Beach Boys and the Beatles, when all you need is a bedroom, a tape recorder, and a bunch of friends to help you.

The story of Elephant 6 is significant, but the particular importance of Neutral Milk Hotel still needs to be explored.  One can find momentary glimpses of future genius in their debut album, On Avery Island: songs like “Gardenhead”, “Song Against Sex”, and “Naomi” are great examples of the warped take on folk music that would be the hallmark of the band’s sound.  In a way it captured the old-time spirit of folk music, which wasn’t the sixties stereotype of the singer/guitarist in a cafe, but friends gathered together playing whatever instruments were handy.  This atmosphere was enhanced by the lo-fi recording techniques and production, which emphasized the do-it-yourself spirit of the group.  And on top of all this were Jeff Mangum’s cryptic and often bizarre lyrics, which draw your attention and invite endless speculation.  However, there was little that would prepare fans to the great leap forward that would come next from the band. 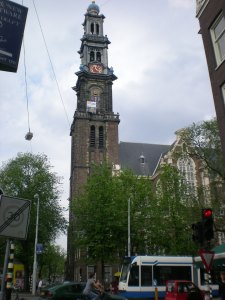 Next door to the Anne Frank House.

I still remember my first introduction to the band, back during my freshman year of college.  I was looking at the away messages that my friends would post on AOL Instant Messenger, and one of them had posted a few lyrics from the song “In the Aeroplane Over the Sea” and had listed the name “Neutral Milk Hotel” underneath.  I found the words particularly moving, which led to further research to learn more about these guys.  After reading a few reviews filled with lavish praise, I immediately used the intra-college network to download the album, since we had long passed the halcyon days of Napster (quick aside that attempts to justify my actions: this was before the days of YouTube and other streaming possibilities; the nearest record store was two towns over and I lacked a car; and I have a strong habit of purchasing what I like after the test preview download as soon as I can).

Those unmistakable first acoustic guitar strums of “The King of Carrot Flowers, Pt. 1” soon were filtering out through my computer speakers, and I was subtly intrigued.  It was a catchy little progression, with a playfulness that was reminiscent of old nursery rhymes.  And then that distinctive and idiosyncratic voice came in, and I was momentarily taken aback.  At this point, I had limited experience with such an unconventional vocal style, where emotion and passion took priority over a pleasing tone or technical accuracy.  So I was put back on my heels a little bit at this point, and I was still listening to the first song at this point.  There’s a slow transition into “The King of Carrot Flowers, Pts. 2 & 3” as a sustained organ chord bridges the two songs, followed by a staccato banjo arpeggio, and then…

At that moment, my first thought is “what the hell have I just gotten myself into?”  And when I played the album for the first time for each of my friends, that was the exact point where they would produce an identical reaction.  I have expressed a similar philosophy as Hank Hill when it comes to Christian Rock, and so this moment was quite jarring: the combination of the raw emotion and the nakedness of the proclamation itself were a bit much to take on first listen.  But then that triumphant trumpet kicks in, the drums begin to ramp up, and then the song morphs into the most punk rock folk song I had ever heard in my life.  My initial concerns were slowly fading away.

It was then that the title track came on, and my conversion was soon complete.  It’s a gorgeous ballad, filled with gorgeous unique touches, like the eerily beautiful singing saw that wavers in and out throughout the song.  Yet it was the lyrics that had slowly captured my attention, language filled with gorgeous imagery and a sentiment of sweetly innocent longing, an emotion that Mangum’s voice wonderfully captured.  And by the time I heard the last verse, I had reached an epiphany.

That last line continues to stick with me to this day; I have never heard a more perfect summation of the absurdity and majesty of existence, and the mere acknowledgement of this fact proves the sentiment in and of itself.  It’s in moments like that instant connection with that particular lyric that reveal how a band can inspire such intense devotion.

* The best explanation that I remember reading of the band name was that “milk hotels” were a specific lodging that I believe sprang up during the time of the Gold Rush, and they were not stocked with alcohol.  “Neutral” didn’t describe the non-leanings of the hotel, but rather was the name of a town.  My search skills are failing at the moment, but I will edit this when I find more information.

** It can also exist as shorthand for people trying to make a quick joke about hipsters or as a comment on seemingly pretentious and inscrutable music, but fuck those guys.

Note: The book from the 33 1/3 series on In the Aeroplane Over the Sea written by Kim Cooper was an invaluable resource in helping to flesh out some of the backstory of the Elephant 6 Collective, and I highly recommend picking up a copy if you want more information.