It had been a long time since I’d seen Cloud Nothings live, back when I caught them on an Austin rooftop at SXSW in 2011.  Cloud Nothings morphed from a bedroom/pop-punk project of Dylan Baldi into a full-fledged band, first as a four-piece and now as a trio, with their albums Attack On Memory and Here and Nowhere Else grabbing the attention of both audiences and critics.  I was impressed with them back then, and their recent work enhanced their reputation even further in my mind, so I was eager to finally witness the band’s evolution on stage instead of just on record.

The night kicked off with The Wytches, a band that sometimes provided energy, and sometimes provided noise; melodies were strictly optional.  METZ in many ways followed the same pattern; the way I put it was that “METZ are really good at making a lot of noise at a quick tempo”.  It was a fiercely energetic punk rock, with music that alternated between dissonant chords or emphasizing a bended note for measures at a time, and vocals that were an indecipherable yell.  It reminded me a lot of Side 2 of Nevermind, and then I got a little depressed wondering if the band members were even alive when that album was released.  By the end of their set, they had won me over a bit, as I let the cacophony rain over me and thought “Sonic Youth really should’ve written some more hardcore songs”. 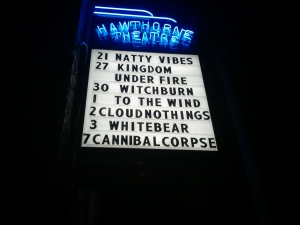 As we waited for the headliner to hit the stage, a quick look around the room gave me the impression that a significant portion of the crowd was even younger than the band members themselves.  I’m pretty sure I have some concert t-shirts that were older than many crowd members, and I’m still on the right side of 30 (though to be fair, we moved from the Adult Beverage section to the front in order to have a more proper experience of the show, so that easily skewed my perspective).  But you know, school’s out for the summer, so I’m perfectly fine with the Youth of America heading out to a punk rock show, especially for a band that’s influenced by the group that wrote an excellent album by that name (Portland’s very own The Wipers).

The more recent material from Cloud Nothings has been angrier and more cynical, but Dylan was a perfectly polite host, as he introduced the band to the crowd.  For the most part, the specific interaction with the audience was minimal, since there was business to attend.  The band tore through mostly newer stuff, rarely taking a breath or stopping to tune.  It certainly didn’t sound like the band was just kicking off a new leg of their tour after taking a short break, since the three guys were just about as tight as possible (when I informed my friend of this fact, he said he never would have guessed). 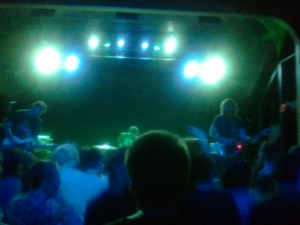 The lighting did me no favors.

Each member turned in a great performance, with drummer Jayson Gerycz sounding as spectacular live as he does on record; the ridiculous acceleration marking the climax of “Psychic Trauma” being a particular highlight.  Dylan’s guitar-playing was also quite the sight, as his fingers performed some incredibly nimble gymnastics across the fretboard.  It’s clear that he uses a lot of interesting and unique chords to get that interplay between rhythm and lead, but to see it actually performed in action gave me a whole new appreciation for his composition skills.  Dylan also tore into a couple of fierce solos, with the one in “Stay Useless” energizing an already-amped crowd.

As could be expected, the sound mix wasn’t particularly good, with different parts burying each other.  The bass was especially brutal, often drenched in unintended feedback and overtones, the vocals were often muddy, and the guitar never really loud enough to hear all the necessary details.  The Hawthorne is not a particularly forgiving space, but the band still put on a great performance built on energy and crowd familiarity.  We didn’t need to hear every single note to know that we just heard a fantastic show. 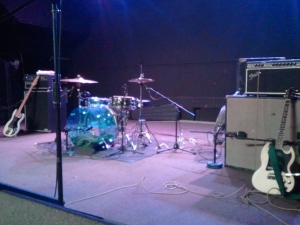 The band has departed.