Beck’s most recent album, Morning Phase, is a brilliant companion piece to the somber Sea Change, but his live show at Edgefield last week recalled a different era of his career–the rocking and free-wheeling days of Odelay.  The attention of most of the public was on LA last weekend, but the best performance of the week took place about 800 miles north and a few days earlier.  Beck and his backing band were energetic and fired up and delivered an absolute knockout of a show.

Beck kicks things off with a fiery “Devil’s Haircut”.

To be honest, this kind of a performance came as a complete surprise to me.  I had seen Beck live once before, back during the Modern Guilt tour in 2008, and in many ways it was easily one of the most disappointing shows I’d ever seen.  He and his touring band played well enough, so from an aural perspective it was fine, but Beck hardly moved at all the whole time, and didn’t seem engaged until late in the encore.  Earlier this year, during the press tour in advance of the release of Morning Phase, Beck had mentioned that he had sustained a back injury and was in a lot of pain during that time, which helped explain the lackluster show.  Still, I wondered if this was only a convenient excuse; given how switched-on Beck was on Thursday night, I’m inclined to believe him.

Beck wasted no time getting down to business by opening with a fuzzed-out rendition of “Devil’s Haircut” that had the crowd singing along to every lyric.  “Black Tambourine” got a surprisingly welcome response from the audience, but it was their reception to “Loser” that inspired some deep thinking on my part.  Consider for a moment how a tossed-off lark of a song like “Loser” is now recognized as a cultural touchstone; especially now that we’re in an era when culture and especially music is extremely fragmented, yet people of all stripes universally love this song.  I want to be there for the day eighty years from now when anthropologists explain to a skeptical public that the highlight of the day for thousands of people was when they got to sing along in unison the lines “I’m a loser baby, so why don’t ya kill me?”  Initially, the line was ironic; a decade later it was nostalgic; and twenty years later it’s practically warm and fuzzy. 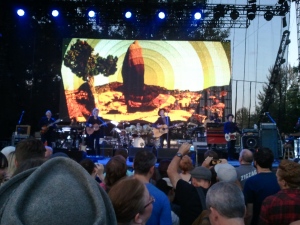 Even the more sedate material was captivating.

Early on, Beck often made mention of a noxious odor that had settled down near the front of the stage, commenting at several pauses during the set about the unexplained smell.  It was indeed unpleasant, but the band and the audience were able to ignore it soon enough, and the rest of the set went off without a hitch.  Beck effortlessly incorporated the new songs from Morning Phase into the set without disrupting the momentum, though perhaps the trade-off was a near-absence songs from Sea Change, besides a gorgeous version of “Lost Cause”.  It never felt like that Beck had to “slow things down” to get to the more delicate material, and songs like “Wave” and “Blue Moon” became even more powerful in their live versions.  Still, the most memorable moments were when the band dipped into older material, like an extremely raucous version of “Novocane”, which morphed into a fierce solo-harmonica version of “One Foot In The Grave”, and a rowdy rendition of the oldie “Beercan”.  I also enjoyed hearing a couple of songs from Modern Guilt, as the guys performed both the title track and “Chemtrails”; the latter was apparently a song in which Beck felt rusty, because he had the lyrics taped to a monitor and could be seen reading off some of the lines as he was performing, but it had no bearing on the performance, especially the roaring climax of the song.

As great as the set was, the encore blew it out of the water.  After they closed with “E-Pro”, police caution tape was used to mark off the stage; bassist Justin Meldal-Johnson then returned and began whipping the crowd into a frenzy by asking if they felt like breaking some laws tonight.  The band then launched into a highly entertaining performance of “Sexx Laws”, the police tape was cut, and the show continued.  Beck kept the mood funky by calmly transitioning into fan-favorite “Debra”, spicing it up with some great ad-libs about Oregon and all the perks that his frequent flyer card apparently holds.  During the final chorus, Beck changed up the lyrics and said he didn’t care about the sister (Debra), he just wanted to get with Jenny…and brought up opener Jenny Lewis to the stage, where they collaborated on an exceptionally amusing cover of Rod Stewart’s “Do Ya Think I’m Sexy”.  Beck and friends and family then finished the night with an extended version of “Where It’s At”, filled with solos highlighting the different members of the band, before it morphed into a dance party on stage with a cover of “Billie Jean”.  All throughout the show, you could see Beck’s children running around backstage, but for the last couple of songs they became a part of the performance as they danced around on stage with the rest of the band; the presence of Beck’s son added some hilarity to “Billie Jean”, as he mockingly felt rejected every time Beck sang “the kid is not my son.”

The only bad part was that we had another day to wait before it was the weekend; that, and the fact that once the show was over we noticed the smell again.  Otherwise, it was pretty close to perfect (though it would be great to hear some stuff from Mutations at some point, but I digress).