Rust Is Just Right and Slowdive have a bit of a shared history, as our first story was an article discussing their surprise reunion earlier this year.  At the time, we were unsure whether the reunification was a one-off deal, but luckily the band would not only launch a tour, but they would stop by our corner of the world here in Oregon.  Considering we were too young to catch them during their initial heyday, we jumped at the opportunity to see the shoegaze legends live.  As they proved Wednesday night, The Jesus And Mary Chain may have created the genre and My Bloody Valentine created its masterpiece, it was Slowdive that perfected the craft. 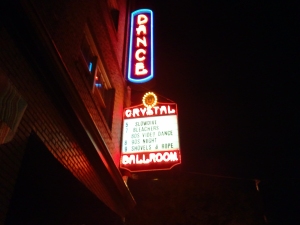 Slowdive up in lights.

Just seeing the headliners would have been enough of a treat, but we were blessed with the additional bonus of Low opening up the show.  Low is definitely a band worthy of its own headlining tour (though they may not be playing in venues as large as the Crystal), but when given an invitation from icons like Slowdive, you take that gig in a heartbeat.  As such, we tried to get in as close to the start of the show as possible, and despite a slight delay at the Will Call office due to some confusion with the customers in front of us, we were able to arrive as their first song faded and “Plastic Cup” began.  This started a run of songs from their overlooked recent album The Invisible Way that the crowd ate up, leading me to suspect that there may have been more than a few people who bought tickets to the show on the strength of the opener alone.  Low stuck with some of their heavier, more bombastic material, like “Monkey” and the sublime “Dinosaur Act”, which elicited cheers from the crowd as soon as the first hints of its melody drifted through the venue.  The band finished up a tight set to thunderous applause, leaving the crowd wanting more, even though we were eagerly anticipating the headliners.

The interstitial music coming over the PA featured some inspired choices like The Shins’ “Caring Is Creepy” and Mazzy Star’s “Fade Into You”, which kept the audience in a suitably relaxed mood before the main act arrived.  But even though we were prepared for an evening of gorgeous, dreamy music, that didn’t stop us from providing a rapturous welcome to Slowdive as they walked onto the stage.  The band kicked the show off with some of their earliest songs, from the Slowdive EP, with the guitars swirling and Rachel Goswell’s and Neil Halstead’s vocals floating in and above the haze in a gorgeous, dreamlike state.  Though those components are the hallmarks of the Slowdive aesthetic, in the live setting you get a full appreciation for Simon Scott’s drums, which not only provided a necessary tether to the ethereal songs, but also provided some brilliant beats in and of themselves.  His contributions tend to go unnoticed on record, but they formed an integral part of the performance.

A glimpse of the psychedelic set

The early results were pleasing, but the band hit another level with “Catch the Breeze” from Just For A Day, with an exhilarating climax propelled by Scott’s thunderous drums enhanced by a delirious strobe effect, in perhaps the most effective use of the trick I’ve ever seen.  It was this moment that confirmed that as wonderful as their albums are, it’s no comparison to Slowdive’s live show.  Highlights included favorites from their classic Souvlaki like “Machine Gun” and “Alison”, which strangely enough were the only songs introduced by the band even though they rank as among the most recognizable.  With all the pure noise generated from the several guitars over the course of most of the set, it made the delicate and sublime “Dagger” stand out even more, as all the reverbs, delays, wahs, filters, and phasers were stripped away for the mournful ballad, backed by a light setup that focused on various bulbs that enhanced the somber overtones of the song.  Considering the respectful silence that greeted the song, I may have been a bit too excited in unleashing a “whoo” as soon as I heard its opening chords, but dammit I was happy to hear one of my favorite songs played live for the first time. 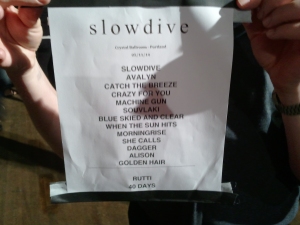 Setlist from an amazing show.

It was an amazing experience from beginning-to-end, and hopefully it inspires the group to continue–whether it be with new music, re-releasing out-of-print albums, remastering their old material (while we’re generally not in favor of the “loudness wars”, the Slowdive back-catalog would benefit greatly from a volume-boost), or just launching more tours.  Because as I said after the show, Slowdive live was even more beautiful than I imagined.