The first day of Project Pabst had a better lineup, but the second day offered just enough that made spending a second day in the heat a worthwhile proposition.  At least it never got as hot as it did the previous day, though there was little to no escape from the sun, aside from the odd bit of shade and the PBRcade.  Still, water refills were once again free, even if that did not make up for the fact the organizers made no adjustments overnight. 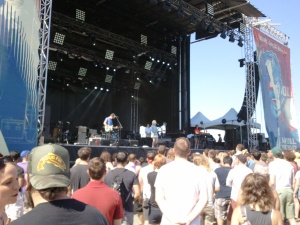 Alvvays delivered the most season-appropriate music

If there is one thing you can count on when you travel in Oregon, it is that random traffic jams will occur without any reason.  A massive slowdown on I-5 added another hour to our travel time, forcing us to miss the majority of Alvvays’s set, an unfortunate result considering we were really excited to see how one of our favorite new artists from 2014 performed live.  However, we can authoritatively state that, from what little we heard, Alvvays’s bouncy, shimmery pop-rock was a perfect soundtrack to a sunny outdoor festival.  Though attendance was lagging at this point in the day, at least there were a devoted few that sang along to closer “Archie, Marry Me”.

Though I have been a fan of Ted Leo for years, I had yet to give his collaboration with Aimee Mann a shot.  However, The Both won me over with their ripping set, with Aimee and Ted displaying a tight chemistry that was only matched by El-P and Killer Mike.  The music was an intriguing mix of the two styles, though I tended to prefer the moments when Ted would kick it up a notch with flashy-but-efficient guitar solos.  The stage banter between the two was a definite highlight, including a memorable bit where Aimee poked fun at Ted’s love of all things Tolkien, with Ted responding by totally owning it and singing an impromptu version of “Frodo of the Nine Fingers”.  Also, for the record, Ted can change a broken guitar string faster than any performer that I have ever seen. 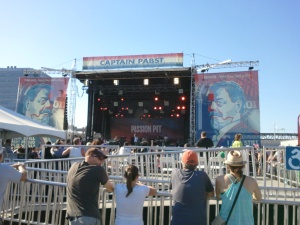 This was the act the crowd appreciated the most

Passion Pit generated the best crowd response of the day, but my reaction to the group has always been the embodiment of the shrug emoji.

Since I spent several years listening to Singles Going Steady, a truly essential compilation for anyone who has ever dabbled in punk rock, the Buzzcocks were the “living legends” reunion I was looking forward to seeing the most at Project Pabst.  Judging by the packed backstage area, I was certainly not alone in this sentiment, as one could easily see other performers like Ted Leo singing along to the words of some of their classic hits like “Why Can’t I Touch It”, “What Do I Get?”,  and “Noise Annoys”.  The group tore through their discography at breakneck speed, with guitarist Steve Diggle constantly asking the sound mixer to crank up the volume.  Just hearing “Ever Fallen In Love” and “Orgasm Addict” live made Day 2 worthwhile in and of itself.

Weezer finished off Project Pabst with some flair.

There are few bands with whom I have more of a love/hate relationship than Weezer, and considering my age it should be easy to spot exactly where that dividing line occurs in the band’s catalog.  I think the surest example of how people my age should not be lumped into the catch-all “millenial” generation is that we would never cheer as loudly for “Back to the Shack” as we would for “My Name Is Jonas” or “The Good Life”.  I ended up sticking around longer than I anticipated since the group did a good job of mixing in some of their genuinely great songs with their later hits that played well to certain segments of the crowd, and I can certainly admired the well-oiled machine that Weezer the performance act has become.

Project Pabst was a solid success this go-around, but hopefully they will learn from a few of their mistakes from this edition as they set up plans for next year.  Hopefully they can create a lineup as exciting and varied as the first two editions.

Number of beards longer than mine: 1

Number of comments on my shirt (Dinosaur Jr. Green Mind cover): 2, including a “Best Shit EVER!”