On Saturday night, legendary electronic act Kraftwerk put on a show that can be truly described as “unique”.  It is difficult to even call what we saw a “concert”, since it is unclear how much of what we heard was performed live.  However, the audience did not pay a fair amount of money just to hear some of their old favorite tracks, but for the totality of the experience, and in that regard Kraftwerk put on a memorable show. 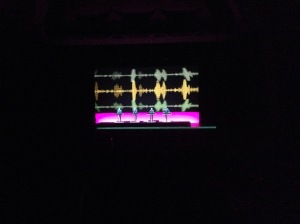 Just four men and their podiums (or podia).

The group constructed a career-spanning set, creating medleys from each distinct era of the band’s history, and the accompanying visuals provided the uninitiated with the appropriate notice as to what album was being covered.  The songs were not mere rote reproductions of what can be found on their records, but updated in a way that blended newer ideas with the basic elements that made up the classic Kraftwerk sound.  It was an intriguing combination, which evokes the fundamental paradox of Kraftwerk’s music as it exists in the 21st century–how does one continue to try to approximate the sound of the future when what was previously composed now sounds so retro?

The melding of old and new also was explored with the visual presentation.  The show was presented in 3-D, and there were several moments sprinkled throughout where the crowd was dazzled by the technical feats on display.  Yet at the same time, most of the visuals were fairly simple in design, as were many of the motions.  For instance, the section for Autobahn could be described as the most accurate depiction of the Out Run arcade game ever created. 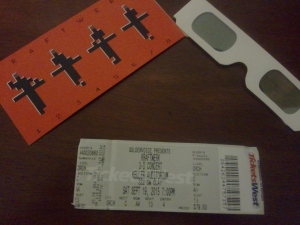 The appropriate materials necessary for enjoyment of the show.

Kraftwerk has always experimented with various levels of automation, and as such it was difficult for the audience to determine as to what exactly was “performed”.  For the entirety of the show, we were presented with four men standing behind wide podiums, with no real hint as to what each member was contributing to what was being heard; it was not until halfway through the set that I could tell that Ralf Hütter was in fact singing some of the lyrics, or that he was playing a synthesizer.  The sole exception was the beginning of the encore, where in a brilliant touch “The Man-Machines” were literally replaced by robots.  This is why I cracked up when audience members were giving ovations to specific members as they exited the stage one-by-one, because it was impossible to determine who was playing what. 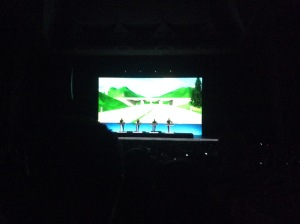 The most beautiful game of Out Run you have ever seen.

Overall, it was a very cool experience that anyone with a level of appreciation of electronic music should try to catch at some point.  Then you can also spend hours afterward contemplating the nature of time and space and man and machine and past and future and so on and so forth, all with a nice pulsing beat as background.