Last year’s Project Pabst was an unqualified success, so it made sense for the organizers to make the festival an annual event instead of a one-off celebration.  Even though it could be argued that this year’s lineup was a step below last year’s edition, Project Pabst offered easily the best selection from a burgeoning Portland festival scene.  And so once again, Rust Is Just Right made the trek up north to enjoy a weekend’s worth of music in a gravel pit.

Into the clown’s mouth…

As great as many of the performances were throughout the weekend, the defining characteristic of Project Pabst was how goddamn hot the entire event was.  I feel ashamed to be complaining about the heat since I spent my childhood playing pickup basketball during the unbearable Louisiana summer months, but living in Oregon has unfortunately made me soft.  Temperatures hit triple digits on the first day, and the primary concern was locating shade wherever it was available, with making sure the sunscreen was still effective a close second.  Actually, the heat was not the problem–it was the sun beating down mercilessly upon all of our heads that contributed to the crowd’s relative misery more than anything.  This was in stark contrast to last year’s edition, which took place at the end of September, and it seems as if the organizers made no effort to alter the accommodations to prepare for the drastic change in weather.

Against Me! declares that “Gender Is Over”

The first set that we caught came from punk rockers Against Me! who delivered a fiery set that was better than their early-afternoon slot would indicate.  Variety is not Against Me!’s strong suit, and as a result their music tends to run a bit on the formulaic side especially when you focus on the drums and bass parts.  However, the band’s energy easily won me over, which is more than I could say for the heat-stricken crowd–I was surprised to see the relatively listless reaction to the band’s breakthrough hit “Thrash Unreal”.

Why have one drummer when you can have two?

Thee Oh Sees kept the punk spirit rolling with their set, delivering their garage-rock at a breakneck speed and with an extra helping of pure cacophony.  The band would have won a trophy for “Most Treble” if any such award was given, which is somewhat ironic considering the number of intriguing bass lines that were sprinkled throughout their set.  For the most part, the group rarely exploited the fact that they had two drummers, choosing to have the two play duplicate parts instead of contrasting or complementary parts.  Their set quickly began to wear thin, with each short burst of fury practically indistinguishable from each other; a full hour was too much, a fact that the band acknowledged when they expressed surprise that they still had twenty-five minutes left in their set.   At this point, Thee Oh Sees became the soundtrack to a food break, where I opted once again for the mediocre Muffaletta sandwich.

TV on the Radio attempt to beat the heat

TV on the Radio put on one of the best shows of last year, so they were one of the bands I was looking forward to seeing the most this weekend.  Like many of the other acts, however, they were not prepared for the relentless heat, as seen by the fact that most of the band was dressed entirely in black.  The band performed with the same intensity and passion as they did last winter, though on occasion the sound mix was not as up to the quality of that previous show; this was most obvious during “Could You”, when the song was dangerously close to falling apart for most of its running time.  The thrilling finale of “Staring at the Sun” served as a microcosm of the set, as initial enthusiasm soon fizzled and the crowd began anticipating a move to the second stage.   The set did nothing to diminish TVOTR in my eyes, but due to the conditions outside of their control it is unlikely they earned many new fans with this performance.

Run the Jewels owned the weekend.

The unquestioned highlight of the whole weekend for me was the chance to finally see Run the Jewels live.  Killer Mike and El-P totally lived up to expectations, as they proved to be one of the most dynamic acts touring today.  In contrast with a lot of hip-hop sets, the duo was able to keep spirits high as they seemingly fed off each other’s energy, with Trackstar the DJ doing a fantastic job manning the 1 and 2.  The crowd ate it all up, with a majority ready to throw up the fist-and-gun hand gestures at a moment’s notice.  Two audience members who had a blast during the set were Del the Funky Homosapien and A-Plus, a fact that I realized when I saw them perform later that night. 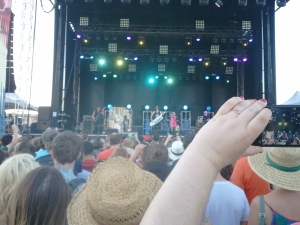 Blondie was the headlining nostalgia act this year, taking over the spot held previously by Tears for Fears.  I was surprised at the lack of buzz that greeted these legends, especially in comparison to last year’s feverish anticipation for Tears for Fears, but it is not as if I was compensating for the lack of enthusiasm myself.  It was a strange and ragged set that managed to not only to display the variety of hits the band has had over the years but to include a random cover of “(You Gotta) Fight For Your Right (To Party!)” (mirroring last year’s TFF set).  Of all things, I felt that a random keytar solo during “Call Me” was the best summary of the performance. 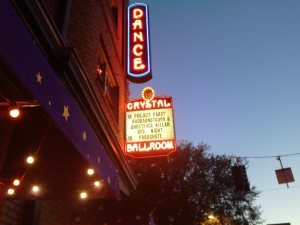 This would have been a nice finale to the evening…

Saturday night was all set to have a thrilling conclusion with Ghostface Killah joining up with BADBADNOTGOOD to perform from their collaboration Sour Soul, except for the fact that Ghostface never showed up.  Stuff like this happens, but the way that the organizers of the show handled the situation was inexcusable.  There may not have been a hotter spot in Portland than the Crystal Ballroom that night, and the fact that the crowd was left in the dark for an hour before BADBADNOTGOOD had to reveal the bad news themselves was inexcusable; at least give the audience a chance to decide to bail or not, and inform them why they are suffering in the heat for so long.  BADBADNOTGOOD tried to make amends and delivered a technically-proficient and spirited jazz-fusion set, but it was impossible to overcome the letdown that the news of Ghostface’s absence had caused.

Number of beards longer than mine: 3, including Kyp Malone of TV on the Radio

Number of comments on my shirt (Neutral Milk Hotel Gramophone/Aeroplane): 0