If you have never been to a !!! show, then you are truly missing out on one of the best live acts of the past fifteen years, and should take immediate steps to correct this oversight.  Every performance is a blast, and Wednesday night at the Doug Fir was no exception, as !!! turned the basement lounge into a bumping dance club. 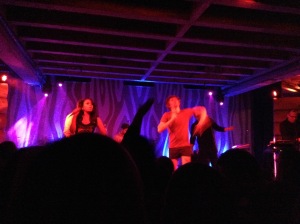 The show marked a complete 180 from the last concert we saw at the Doug Fir, as !!! and Low are about as diametrically different as can be, though it was just as excellent.  !!! has always made catchy, hook-filled dance-punk, but the music takes on an added dimension when performed live.  The band does a remarkable job of establishing fun and infectious grooves, providing the groundwork for frontman Nic Offer’s stage antics and wise-cracking vocals to help loosen up the crowd.  By the end of the night, even the notoriously dance-phobic Portland crowd loosens up and shows off a move or two.  After all, when you watch Nic perform some of the corniest moves possible up on the stage, it really takes away all the pressure of trying not to embarrass yourself.

The crowd was glad that backup singer Meah Pace made the trip out west for this string of dates, as her vocals added an extra dimension to a lot of the new material, and the interplay between Pace and Offer was quite entertaining.  The setlist was a mix between old and new, with their latest album As If blending in well with the old standbys.  The show even ended on a new song, a stretched-out version of “I Feel So Free (Citation Needed)”, complete with audience interaction.

The band opened for themselves as a Stereolab tribute band, “Stereolad”.

Though not everyone was in on the joke at first, !!! opened up for themselves as “Stereolad”, a Stereolab tribute band that included Offer sporting a dress and a ridiculous French accent.  It was a nice segue from the opening act The Lower 48, who kicked off the show with some infectious straight-ahead garage-blues rock.  Hopefully we will see them at more local shows.

New music, news, and other fun stuff to help start your week…

Last night marked the end (?) of the beloved and bizarre animated series Aqua Teen Hunger Force, but before the show officially said goodbye, the folks at Adult Swim enlisted the help of a legendary artist who is a surprisingly devoted fan: Patti Smith.  Smith gave a brief interview to Pitchfork explaining both her love of the show and how she ended up recording the song for the series finale.

Over the weekend, a pretty goddamn awesome supergroup convened up in Seattle to pay tribute to the legendary punk album Raw Power from Iggy & The Stooges.  Mike McCready from Pearl Jam, Mark Arm from Mudhoney, Barrett Martin from Screaming Trees, and Duff McKagan from Guns ‘N Roses got together for the charity gig in support of radio station KEXP, and Stereogum has some of the footage from this memorable gig.

Foals are set to release their latest album, What Went Down, this Friday.  They have released several videos to help build anticipation for the new album already, and today the group released their latest with a “CCTV” version of the low-key “London Thunder”.

!!! announced dates for a tour this fall, and I highly recommend that you check your calendars to see if you are free the night they hit your town, because there are few things in life that are as fun as a !!! show.  The band also shared a goofy lyric video for new single “Freedom ’15”, off their upcoming album As If, which will be released on October 16.

For those of you looking for a fun way to kill some time, check out this piece which attempts to determine what recent songs have become timeless through an analysis of Spotify play counts.

Finally, enjoy killing some time with a couple of lists.  First, Willamette Week offers the 21 Best Songs About Portland, which does a fair job of covering the city’s unusual musical history.  Due to a technicality that the song must explicitly reference Rip City in some capacity, the best song about Portland was excluded, but otherwise it was a solid attempt.  And then for the giant time-waster, Pitchfork has decided to use this as a dead week to promote their list of the 200 Best Songs of the 80’s.

Embedded above is the best (and most accurate) song about Portland.  You have probably heard it before.