We usually don’t get much snow in the Pacific Northwest, and as a result we’re generally unprepared to deal with such unpleasantness.  This means outside of a couple of hours of shoveling the driveway and taking a quick trip to the grocery store (and then getting the car stuck in the snow before making it up the last hill to my house), it’s been a stay-indoors-the-whole-weekend kind of time here. 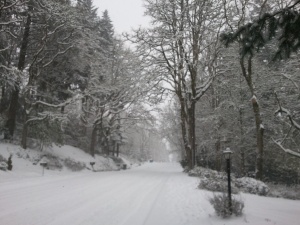 This will not get plowed for days.

At least I’m taking advantage of the opportunity to watch one of my many music DVDs, and what better time to watch the documentary of Sigur Rós’s tour of their homeland of Iceland.  The visuals of their countryside are stunning, and as one would expect with the majestic music of the band, so are the songs.  The band comes up with many novel arrangements of their songs, ranging from their stunning light shows in Reykjavik to acoustic performances in the middle of nowhere.  In addition, I also love seeing just how some of the most unreal sounds that the band makes on record are reproduced live.

I highly recommend buying it, but here’s at least the first disc.