We don’t have any real #longreads for you to scroll through this weekend, but there are a lot of shorter interesting articles that are worth your time.  That’s probably a good thing, because I imagine a lot of people will be focused on the NCAA Tournament this weekend; then again, if you were looking for us a source of distraction, we’re sorry.

First, for the music theory enthusiasts out there, Slate did a piece on one man’s quest to determine the time signature of the theme from The Terminator.  If you’re unfamiliar with the concept of a time signature in music, there’s a quick explanation in the article, so don’t worry.  For the record, my initial guess was 10/8. 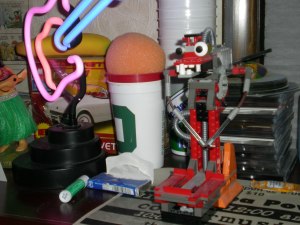 Not The Terminator, but frightening nonetheless

I was glad to see that one of the conditions of the settlement between GoldieBlox and the Beastie Boys was a public apology by GoldieBlox.  If the case had gone to litigation, there was a potentially an intriguing fight over how parody in certain contexts should be handled under Fair Use.  Complicating matters for GoldieBlox was the fact that they were using the parody for other commercial purposes.  After all this, I hope everyone learned this lesson: always ask permission, and make sure you get the proper license.

There have been discussions recently on the issue of audio quality and the way that digital technology from both the musician’s and consumer’s perspective has had a significant effect on recording (See “Pono”), this article takes a look at how musicians have attempted to push for greater rights and use of live musicians instead of samples.  The piece makes good points about how difficult it is to actually replicate live sounds, and how musicians (especially string players) are often screwed when it comes to compensation.  However, the article fails to account how some artists take advantage of the more mechanized sound and use it to their advantage (See the entire career of Kraftwerk).  I appreciate their intentions, but it’s not the only pathway.

On a similar note, here’s some more disappointing news for musicians: Late Night with Seth Meyers is booking fewer musical guests than the show did under Jimmy Fallon.  Billboard reports that this is by design, as the show believes that Meyers has other strengths.  Say what you will about Fallon’s ability as a late night host (and believe me, I have), I always appreciated that he would often book underground acts and give them exposure, like Titus Andronicus or Parquet Courts.  Hell, Refused even played Fallon’s show.  Hopefully Fallon will do some similar booking with The Tonight Show in the future.

Record Store Day is coming up in a month, and there are several cool releases to look forward to picking up this year.  But while RSD has provided a lot of good exposure to independent stores in the past few years and have provided a lot of foot traffic, this article explains that the type of product being offered often languishes on the shelves and other such factors mean that the “holiday” may actually hurt several stores.

CNN continues to show that they have little idea about how to do anything right.  Deadspin has a piece on how they used an absolutely awful lede in a story about Kurt Cobain.  The original article has since been altered, but the Deadspin staff had fun in coming up with their own versions of other possibly awful openers that CNN could have opted to use.

Finally, here’s a pleasant song for your weekend: Real Estate recently did a live cover of Neil Young’s “Only Love Can Break Your Heart”, and Pitchfork has the video.  It’s one of my favorite songs, and I appreciate the spirit of the cover.