We’ve got some great #longreads for you this weekend, so try to fit these in as you enjoy Record Store Day.

Many music fans were excited for the reunion of OutKast at Coachella last weekend (this one included), but unfortunately it wasn’t the joyous celebration that we were hoping would occur.  There’s a lot to be said about the general shittiness of festivals, and Coachella specifically, but even that doesn’t account for some of the disappointment that many OutKast fans felt (personally, as a viewer watching things on my couch, I was able to enjoy it, album-plug for Future notwithstanding).  Rembert Browne at Grantland does a great job of expounding on this sentiment.  And if you’re wondering why the OutKast reunion was such a big deal in the first place, Andrea Battleground at the AVClub can help get you up to speed.

Last weekend I engaged in a scavenger hunt across Portland with some friends, and one of the items that we procured was an 8-Track of Bob Seger’s Night Moves.  It is now one of my most valued possessions.  Coincidentally enough, Steven Hyden wrote a piece this week why you shouldn’t scoff at this notion.  Behold, in all its glory: 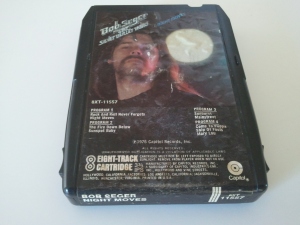 My new most valued possession

SPIN has an excerpt from the recently released oral history of Dinosaur Jr.  You get a look at the early, early days of the band, as they toured around Massachusetts and their early ventures into New York, as well as their first tour as they opened for Sonic Youth.

Pitchfork has a couple of excellent features this week, both analyzing more the business side of music, and specifically the use and accumulation of data.  First, there was an article outlining the evolution of the Billboard R&B/Hip-Hop chart, and how its current format leads to problems in tracking songs.  It raises some interesting points, but to dismiss the impact on how the specific genre has had an impact on Top 40 is a bit of a mistake, and maybe a solution that is more in line with how Billboard charts Alternative Rock may be one way to go.  The other piece looks at the history of streaming and its future, finding analogues in prior devices like the jukebox and looking at how data is processed to give a better idea for programs in dispensing recommendations.  Both are great and worth the time to read.