“Vinyl or CD’s?” is an argument that has raged on for decades, and the shifting fortunes of both formats in the last few years has inspired numerous articles promoting one side over the other.  LA Weekly has an extensive and informative piece on the debate, providing a history of the creation of the technology as well as insights into the music recording process to help support the claim that compact discs do in fact “sound better.”  That should be good news to record companies, who apparently view the recent surge in vinyl sales as “just a fad” even if there are reasons to believe this isn’t the case.*

We mentioned earlier this week that Sundance saw the premiere of the new Kurt Cobain documentary Montage of Heck, and because our love for Nirvana has barely diminished over the years, multiple publications from a variety of  backgrounds have pieces on director Brett Morgen and his film, including Rolling Stone, Vanity Fair, and The Daily Beast.

As a companion to our recent review of the fantastic new Sleater-Kinney album No Cities to Love, you may want to read this extensive feature on Carrie Brownstein for Consequence of Sound’s quarterly literary magazine FACES.

Do not adjust your flickering screen: Rust Is Just Right is recommending that you read an interview with Wes Borland of Limp Bizkit.  Stereogum has a fascinating discussion with the guitarist that shows his good humor and self-awareness of his place in music, and Borland provides an interesting perspective of the business and how bands operate.

And finally, Pitchfork has a couple of worthwhile pieces from “The Pitch”, both relating to leaks: the first analyzes the quest to determine whether or not the SoundCloud leak of unreleased Aphex Twin material was genuine, while the second examines the history of digital album leaks from the past two decades.

Some #longreads while you nurse that hangover…

It’s always a treat when we get to hear from Aphex Twin, so you should probably read this interview where the man himself answers questions from several famous DJs and producers in this special from Groove magazine.

The AV Club takes a look at how Pink Floyd ended up with a number one album when they released The Division Bell in 1994, based purely on the power of nostalgia.

A look at the greater context of Black Messiah, with an eye towards how those unfamiliar with the work of D’Angelo should approach it, with help from a fan.

And finally, for the more technologically inclined, here’s a look at how the different ways you physically store your digital music can affect its sound quality.  I haven’t read it yet, but for those readers who have a stronger scientific background, feel free to chime in and respond.

It was worth the wait.  It had been over a decade since we last had a proper Aphex Twin release, but Richard James has rewarded us with the challenging but beautiful Syro.  It’s not a revolutionary new work, but more of a distillation of the best parts of Drukqs with flashes of the brilliance of his 90’s output that put him at the vanguard of the electronic music movement. 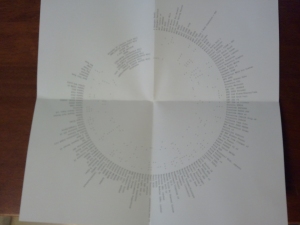 Now, I’ll be the first to admit that I’m not a huge fan of electronica, and not particularly an expert of the genre (though I’m sure I upset at least a few people by using the catch-all term “electronica).  I haven’t been a regular purchaser of electronic music since the Big Beat era; any forays into the area are usually based on the insistent recommendations of friends (Darkside) or from research into musicians with a penchant for experimentation (Tim Hecker).  The rise of EDM in the past few years has only been a source of confusion and frustration, as the entire movement seems to be merely a repackaging of sounds and ideas that Richard James perfected back in the 90’s.  Mix in the abrasiveness and breakbeats of “Come to Daddy” with the acid-jazz grooviness and distorted finish of “Windowlicker”, and you have 95% of the formula that’s racking up the big bucks at these raves.  Just toss in a trick as old as music itself (“the drop” of the bass has always been a trick in a band’s arsenal), apply it in a haphazard fashion, ignore any semblance of rhythm or conception of songcraft in general, and you’ve got yourself EDM. 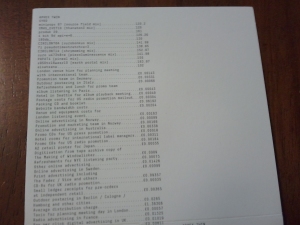 But Richard James sets himself apart from his successors, because it’s clear to even the lay individual that has a much better understanding of the fundamentals of music itself.  Even when he’s trafficking in beats that are lined-up with pinpoint precision based on computer formulas and arranged in odd meters, you can still feel a beat.  It may be odd, it may be unfamiliar, but it’s not arrhythmic–there’s a method to the madness.  James also has an excellent grasp of songwriting, providing careful shape to each song and the album as a whole.  The album draws you in with a subtle and trippy beginning, before pumping up the energy with a frenetic middle, before drawing back down and ending with a beautiful, Satie-inspired epilogue (meaning a delicate, spare piano with the barest hints of chord progression and melody, but still capable of evoking immense beauty). 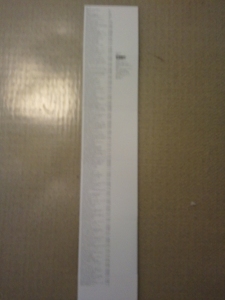 The entire list of expenses, which can be read after unfolding the album cover.

Whether you’re listening to Syro as background music or with intense concentration through headphones, it’s clearly apparent that each sound was created and applied with the greatest of care and precision.  Fans will recall many similar tones from the Richard D. James Album, but he also tosses in several new variations as well, with each perfectly calibrated to elicit a particular emotion.  It’s difficult to go into more detail, not simply because it’s practically impossible to refer to specific tracks without employing a significant amount of cutting and pasting (James really emphasizes the pointlessness in some respects of distinguishing certain tracks by employing random letters and signifying particular “mixes” for each song, as if we have access to alternative mixes and they’re not just holed up on his hard drive somewhere, though noting the BPM for each track is a nice touch), but also because of the sheer amount of notes and styles in each particular track.  Hence, the resort to generalities.

It should be clear then this is an electronic album that casual fans will appreciate.  And since the more specialized press seems to be in agreement that his is a great record, I can take comfort in the fact that my inexperienced perspective has at least some solid footing.  It won’t be the Kind of Blue of the genre, but definitely a worthy addition to Aphex Twin’s illustrious discography.

Jeff Tweedy is set to release the album (Sukierae) he recorded with his son Spencer tomorrow, and the duo stopped by the NPR offices to perform as a part of their “Tiny Desk Concerts” series.

The Antlers have another gorgeous, dreamy video from Familiars, this time for the song “Refuge”.  Not much actually happens, but that shouldn’t stop you from enjoying all the pretty colors.

If you’re in the mood for a little more action in your music videos, and don’t mind handling a bit of the bizarre, then check out the video for the Suicide-inspired track “Grid” by Perfume Genius, whose new album Too Bright is also set to come out tomorrow.

King Tuff’s new album “Black Moon Spell” is also set to be released on the 23rd, and if you’re quick you can listen to a stream of the glam-rock album on NPR right now.  The title track is the best song that T. Rex never released, if you ask me.

Kele Okereke from Bloc Party will be releasing his second solo album on October 13, and today released the second single from Trick.  Listen to “Coasting” here.

On Friday we linked to Pitchfork’s extensive interview with Richard D. James, but we we wanted to make sure that you saw this video that was linked to in the article of an early performance of “Aisatsana”, featuring a piano swung across the stage as if it were a pendulum.  That should be enough of a signal for you to watch:

And finally, Carl Newman and Neko Case from the New Pornographers talked to NPR about what it takes to write a good pop song, and the piece includes video of their performance at the Brill Building which gave their new album its name.  Unfortunately, the piece also didn’t include Neko’s cover of the Squidbillies theme song, but we got you covered.

Some #longreads as you prepare for the return of the purest of athletic competitions: Ivy League football.

Next week sees the release of the highly-anticipated new album from Aphex Twin, Syro, though if you live outside of the United States, you may have had the chance to purchase the album as soon as today.  This is Richard D. James’s first album under the Aphex Twin moniker since Drukqs came out in 2001, so anticipation has been extremely high for electronica fans.  James sat down for an extended interview with Pitchfork (filled with all sorts of fancy website tricks) that you should probably read to help pass the time before you get a copy of Syro in your hands, and the Village Voice has a piece putting the new album into context.  For a taste of the new album, here’s “minipops 67 [120.2]

Another high-profile release coming out next week is the album that Wilco’s Jeff Tweedy made with his son Spencer (released under the name “Tweedy”), Sukierae.  Jeff writes a piece for The Guardian discussing the significance of the album form, and why Suierae is a double-album.

J Mascis sat down for a fun interview with Pitchfork for their Guest List feature.

WIRED samples some psychological studies that attempt to explain the scientific reason why you and your friends tend to like the same music as well as analyzing the significance of music in social interaction.

And finally, our readers should be well-aware of how psyched we are about the reunion of Death From Above 1979, so of course we’re going to pass along any stories about these guys.  FADER talks to the band about some of their favorite movies while Rolling Stone talks to the band about their time apart.  In true Rolling Stone fashion, the interviewer keeps on referring to the limited-run Romantic Rights EP as the touchstone of their early days instead of the wide-released full-length You’re a Woman, I’m a Machine, but I’m willing to let that detail go.